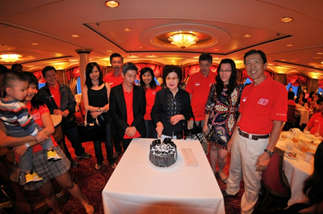 2013 marks Beng Hui’s 25 years of business in the marine industry. As such, the management arranged a 2D2N Star Cruise trip to reward all staff for their hard work and also to celebrate the company’s anniversary.

On the morning of the first day, the program started with a speech and interesting PowerPoint on our history by Chairman Mr Alvin Lim at The Lido, a theatre in which most Star Virgo’s performances are carried out. Thereafter, Long Service Awards were given out to veterans who had served for more than 20years. Said Mr Patrick Lim, our COO, of Mr Pnwee Eng Hock who has been with the company since 1st May 1988, “He was the one who taught me English when I was young!”. 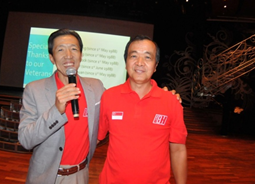 The top ten best employees (highest votes among colleagues) were also announced for the first quarter of 2013 with the top 3 being Mr Pnwee Eng Hock, Miss Jane Goh and Mr Leo Chia.

After the morning gathering, Star Virgo’s crew arranged 2 games for us to play at Deck 7: The Promenade. The first game was “Scavenger Hunt” whereby every group was given a list and had to source for answers all around the cruise. 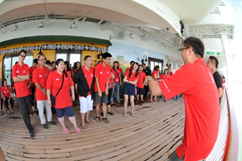 The second game was “Win, Lose or Draw”- one person acts and the rest of the team guesses the word. There was a lot of laughter coming from the deck as some of the actions were really funny!

At around 11am, the cruise docked at port Klang for half a day. Some of our colleagues went for a short tour around KL while the rest choose to stay in the cruise to enjoy facilities like Gym, Swimming pool, Jacuzzi, Basketball court, Table Tennis, Library, Arcade etc.

Our Management cutting the cake

In the night, we had our group dinner and cake cutting at Bella Vista. We enjoyed a sumptuous 7 course Chinese dinner and also took the time to mingle around. After the dinner, most of the people went to the adult show “Nikita” while some went to sing karaoke to prepare for the corporate rebranding karaoke competition.

Shortly after our breakfast the next morning, the cruise docked at Harbour Front port. This concludes our 2D2N SG-KL-SG trip, although it is a short trip, I’m sure everyone enjoyed it as much as I did!