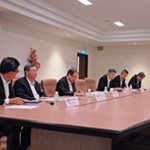 Annual General Meeting (AGM) of BH Global Corporation Limited was held on 18th April 2016 at the Boardroom of 8 Penjuru Lane.

Annual General Meeting (AGM) of BH Global Corporation Limited was held on 18th April 2016 at the Boardroom of 8 Penjuru Lane. CEO, Mr Vincent Lim shared with the shareholders on the company’s plans and prospects for 2016 before proceeding with the various Resolutions.

There were a total of seven resolutions to be passed.

One of which was the re-election of following Directors retiring pursuant to Article 104 of the Company’s Constitution:

Mr Alvin Lim Hwee Hong will, upon re-election, continue to serve as the Executive Chairman. Mr David Chia Tian Bin will, upon re-election as Director of the Company, continue to serve as the Chairman of the Audit Committee as well as a member of the Remuneration Committee. He will be considered independent for the purposes of Rule 704(8) of the Listing Manual of the Singapore Exchange Securities Trading Limited.

Another resolution was the re-appointment of Messrs Baker Tilly TFW LLP as the auditors of the Company and to authorise the Directors to fix their remuneration.

This meeting is required by law and are held to give an overall status of the organization. It may include the election of board directors, making important business decisions, informing members of previous and future activities. All shareholders and partners will receive copies of company’s accounts and review of fiscal information for the past year all within the latest annual report.

Shareholders were treated to a sumptuous buffet and they had a chance to speak to the directors personally. The event ended successfully with more than 99% for all resolutions.